Getting our client out of jail fast is our top priority!

We handle ALL types of bonds! Our most-common bail bonds services are listed below ...

We post bail for Driving Under the Influence, Suspended Licenses and other driving offenses. DWLS or Driving While License Suspended is a charge that varies in bond amount depending on how many times the defendant has been arrested and/or convicted of the same type of charge. [DUI Details] 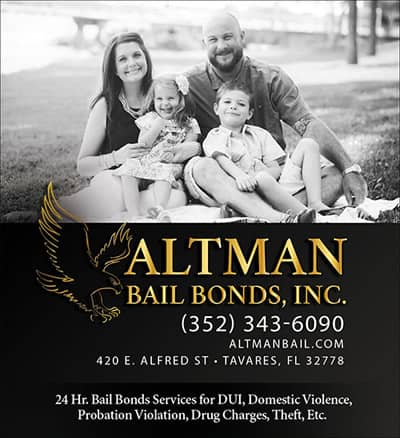 Bail Out of Tavares Jail

Our fast bail bond process is outlined below:

Call our bail bonding service 24 hours around the clock! We will begin our simple bail bond process and evaluate how we can best serve you as our client. We are specialized in Tavares, FL bail bonds requiring no collateral.

Our Bail Bondsman, Tim Altman, will have a brief and friendly conversation with the person posting bail. This qualifying will only take a few minutes and our licensed bail bondsman explains the process for bonding out of the (Lake County Detention Center) - Tavares Jail

Our bail qualifying is quick and simple. Call our bondsman around the clock.

Once the qualifying questions are answered, and the standard FL bond premium fee (10%) is expalined, our bail bondsman move fast to post our bond at the Tavares Jail in Lake County, Florida.

Our Bondsman are local and minutes from posting our client's bail bond at the County Jail.

We start the bonding out process minutes after the qualifying is complete. This will allow the Lake County Detention Center to begin the release process while you're on the way to our office, located in historic downtown Tavares, close to the jail.

Customer service is a must, and our goal is a fast release from jail on bond. We take unique steps to ensure less waiting for our client's.

Welcome to our bail bonds office's website. Being arrested and charged with a criminal offense will be stressful and unfamiliar to most. Every person arrested is given the presumption of innocence and should bail out of jail to fight their case. We take due diligence to ensure this process is fast, smooth, and efficient.

When a family member or friend is arrested, knowing what to do next is very important. Our bondsmen are very knowledgeable and will explain the booking, bond, and release process all in detail. We believe in customer service first and foremost, fast release from jail and are open and available 24 hours a day to serve you as our client.

Our bail bonds company is local to Lake County FL, near the Tavares FL jail and we have 20 years local experience to help you in this time of need. Altman’s bonding company offers bail bonds without collateral along with payment plans for medium to large bail bond premium. Bail by Phone is also available at the bondsman’s discretion.

Call our trusted Tavares bail bondsman now 24/7 to see how we may assist you in getting your loved one out of jail fast.

If you have been charged with a criminal offense, you will need to post a bail right away to gain your freedom pretrial. Posting a surety bond with a bail bonds company is the best way to do this. A surety bail bond guarantees the defendant’s appearance to all future court dates during the criminal case and only costs 10 percent of the full bail.

Depending on the severity of the case, you may be released on your own recognizance after initial appearance, which means that the court is expecting you to comply and show up to court on your scheduled court date. However, there is the likelihood that the judge will require you to insure your compliance to go to court by establishing bail, a payment that can range in amount based on the judge’s recommendation. The court will then hold the funds provided to them until the court case is completed.

Of course, there are many instances in which one cannot afford to pay the entire bail amount that has been set. In the case that you are not able to afford the full cash bail amount paid to the jail, your next course of action is to seek out a bail bonds company for help with that. The purpose of a bail bonds company is to provide you a surety bail bond, which works like insurance in that the person charged with a crime will show up in court when ordered to do so.

The cost of the bond is a percentage of the bail, which in Florida is 10 percent of the total bail. Aside from that, the bail bonds agency may or may not require you to secure the bond with collateral, including the deed to a house or vehicle, jewelry or other valuables. Collateral is something a friend or family member may agree to put up to secure the bond for you. At Altman Bail Bonds, however, we do not require physical collateral in most cases so make sure you find that out when you contact any bail bonds agency. Once this is all arranged, the company will send a bail bondsman to the local jail to post bail and begin the jail release process.

At Altman Bail Bonds, we understand how important it is to go with a bail bonds company you can trust. When searching for “bail bonds near me,” or “bail bondsman near me,” you will see that our professional bail bonds company has several years of experience in bail bonds service. We are also one of the top companies to work with as will be evident in our Google reviews. We proudly serve residents of Lake County, FL and surrounding areas.

Now that we have established what bail bonds are, it is also important to know, “what is a bail bondsman?” A bail bondsman is what someone who owns or works for a bail bond company is often referred to as. They may even be referred to as bail bonds agents. However one refers to them as, they act as sureties and post bail on behalf of the defendants. A bondsman or licensed bail bonds agent will ultimately guarantee the defendant’s appearance in court throughout the entire court case. Should the defendant fail to appear in court, the courts will then forfeit the bondsman’s full bail amount and require the bail agency to locate their client and get them back to court.

How Do Bail Bonds Work?

To recap, bail bond agencies, which are heavily regulated under Florida state laws, help those who have been charged with criminal offenses to be released from jail and be able to have their freedom pending trial.

Below we have briefly outlined the steps you will need to take after being arrested or a judge has set your bail amount during your bond hearing:

When you call our bail bonds agency, day or night, our bail agents will get to work on beginning your bail bonds process. It is quite simple and it is something we can easily go over with you on the phone. In many cases the entire bail bond process can be handled completely over the phone and email expediting the release of our client.

When it comes to a bail bond, posting a bond will signal the jail to begin their release process. The jail will require that the surety deposit the entire bail amount. The contractual funds are then held until the case has concluded, which is often years.

Once our client is released on bond we must make sure they attend their mandatory court appearances. Court cases usually last from 6 months to a few years. Hiring a bail bonds agency not only gives you freedom to fight your case, but also gives you a professional to consult with on the court process. Most of our clients rarely know how the courts work, and having a professional for over two decades in your corner is an invaluable resource.

As a Florida bondsman for over two decades, Altman Bail Bonds, Inc. provides services for bail bonds Lake County, FL, which includes the city of Tavares. Working within the criminal justice system, we understand that help for families of the arrested is not readily available. However, we are here to guide you as best as we can. In fact, since we want to help you out, we are one of the few companies that will not request any physical collateral from you in most cases. You may have family and friends who would be willing to provide a guarantee to secure a bond for you. In lieu of physical collateral such as a house or property deed, car title, or cash, our bail bonding agency will accept a personal guarantee from family or friends in the form of a bail bond agreement and promissory note. This bail agreement and guarantee promises that the co-signer will make sure the defendant is at all required hearings or will be held financially liable for the full bail amount. If our defendant misses a court date on purpose, and is on the run, we have a short time period of 60 days to locate them before the clerk cashes our bail bond. During these 60 days we will either help our defendant fix their failure to appear or locate them and surrender them to custody. Signing for a defendant’s bail bond is to be taken very seriously. You do have the assurance of a bail bonds agent to help if the defendant skips court. Bail bond agencies are financially liable for our clients who fail to appear in court. That being the case, the ultimate goal is for our client to appear at all mandatory court dates throughout the case. Most defendants will appear as required when they are released under a bail bond, and we have skin in the game to ensure this.

Based in Tavares, FL, Altman Bail Bonds, Inc. was established in 1999 by Tim Altman, a longtime licensed bail bond agent. We pride ourselves in having gained the trust of our clients in providing surety bail bonds in the entire state of Florida. As a full-time bail bondsman, we have worked in several county jails in Central Florida and are knowledgeable with the bail bonds procedures at Lake County Detention Center and Lake County FL Courthouse. Focused on serving local residents of the Lake County community, Tim Altman is also involved with local outreach programs. Our goal is to provide excellent customer service as you are going through a challenging situation. For more information about our bail bonds service, call us at 352-343-6090.

Known as America’s Seaplane city, Tavares is located in Lake County. Home to an estimated 366,000 residents, Lake County is ranked the third fastest growing county in the state of Florida. Thanks to the efficiency of its local government agencies as well as its vigilant citizens, it is also considered one of the safest counties to live in. Clustered around the Lake County Historic Courthouse, residents will find the Lake County Jail and Lake County Clerk of Courts, which are situated on Main Street.