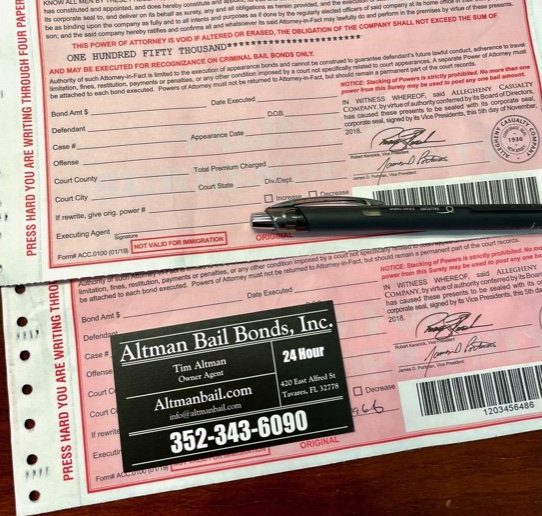 When someone is arrested, many factors will be in play as to when you will need to post their bond. Posting bond for someone that is being held in custody at the jail is not always best advised if the defendant has other cases that are active and open.  In the next few paragraphs I will explain the best options for a defendant that will need to post bond on a new arrest, or should wait.

Being arrested and taken into jail custody is scary to most. Most arrest and jailable offenses will have a bail set right away per a uniform bail schedule and most people will be able to bail out within a few hours. If a defendant does not have any other open cases and if the defendant is not on probation, they should bail out right away.

A few exceptions to this are:

If you’re already out on bond

When you’re already out on bond and have the unfortunate luck to be arrested for a new offense, this is when you need to ask yourself should I bond out. Under s. 903.0471, F.S., the court may revoke, on its own motion, pretrial release and order pretrial detention if the State finds probable cause to believe that the defendant committed a new crime while on bond or pretrial release. This new crime order is used widely and often here in Lake County’s 5th judicial circuit. We always advise our clients of this high probability of a revoke bond when presented with someone already out on pretrial release or bond and allow them to make the decision to post bail or not.

If the defendant is on probation

When a defendant is on probation whether it is misdemeanor or felony, a new arrest will almost always result in a violation of probation. Felony vop’s will almost always happen as a probable cause violation when the defendant is brought into a jail for a new offense. This prevents the person from having to make the decision to bail out or not. Misdemeanor vop’s usually happen a little different and the violation will actually be delayed a few weeks, this leaves the option to bail out now.

Sometimes people that are arrested have cases in another county or state that a hold will be placed on them to be extradited to that jurisdiction. A hold is simply when another county wants you in their jail, be that a warrant or probation violation. When someone is being held in a county with bail and a hold for another county without bail, we always advise to post bail right away and force the other county to make a transportation decision. If the crime is serious enough they will usually transport the defendant within 10 days. Our bail bonds agency has noticed that when we do this, the person’s time behind bars is diminished when they address the no bond county first and as soon as possible. Sometimes when defendant’s get to the county that has a no bond, they will see bond hearing judge and bail be set then. Usually the case that has the hold will not be addressed until the body gets to their jurisdiction.

If you want to get Time Served

When a defendant is arrested on minor misdemeanors, sometimes they just want to get their time in and be done. We routinely here of clients not wanting to be on probation because they are in fear they will violate. Most misdemeanors arrest that requires a plea deal will be some type of probation for 6 months to a year. Sometimes it’s best not to bail out right away and do your time preventing a probation plea deal.

When you’re sentenced on one case but have others open

As a bail bondsman one of our duties is to make sure we do right by our client and help them navigate the treacherous judicial system. When we have clients sentenced on one case but have bail on another case we want to make sure they get everyday credit before we post their bond. Posting bail on someone when they have more time left on a separate sentence takes away the credit for the charges that are bonded. Technically even though the defendant is still in custody on a sentence, once bonds are processed on the bondable offenses, they would be considered out on bond.

Being arrested and needing a bondsman can be complicated with other cases open on the defendant. Our bondsman will always give you the best advice with the defendant in mind. Call our bail bonds office in historic downtown Tavares around the clock for help bonding out of the Lake County Detention Center.